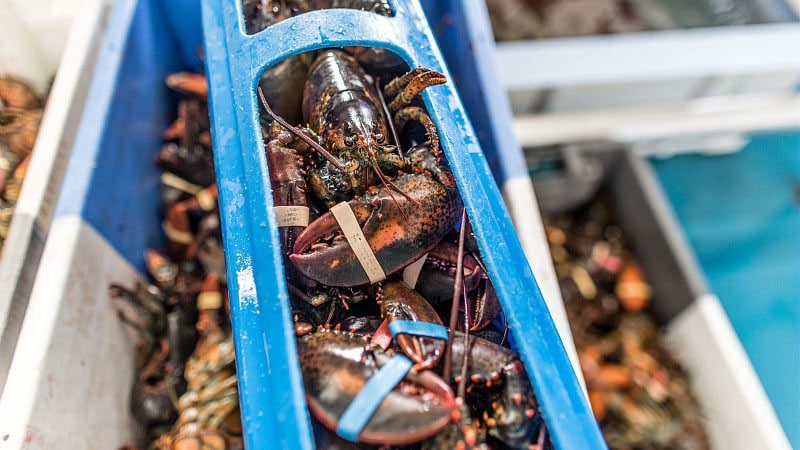 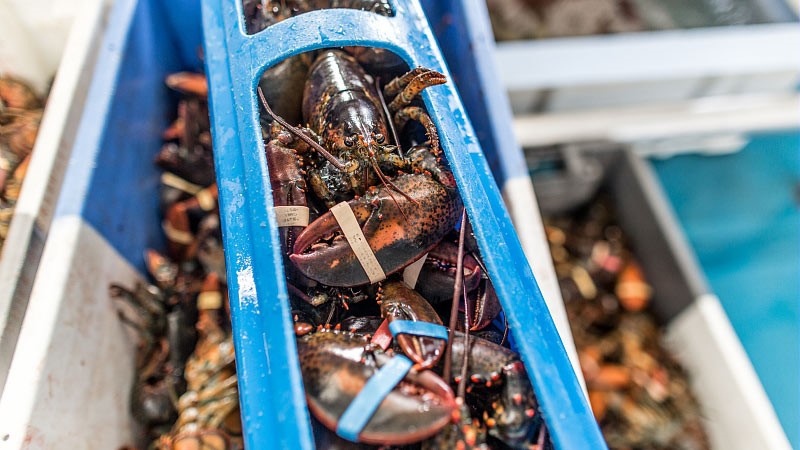 Lobsters is a cuisine delicacy and a healthy protein source. For most of us, removing the outer lobster shell is a tricky, time-consuming and intensive task, as it requires skills, a sharp knife and most importantly, lots of patience! This is a reason why HPP offers so many advantages for Lobster and other shellfish meat extraction.

HPP weakens the muscles attaching the shell and meat of crustaceans. HPP shucking outstandingly allows the 100% recovery of edible lobster meat with minimal effort, as shown in the image below (Fig. 1) and demonstrated in the following video made by Japanese HPP seafood company HPP Mitsunori.

Thus, French processor Cinq Degrés Ouest stores lobsters in seawater tanks to keep them alive before HPP. The production line of Cinq-DeGrés continues with the manual shell removal and meat collection after HPP, followed by cryogenic freezing and packaging (Fig. 2). Cinq-De-Grés keeps temperature between 4 – 8 °C at all stages, guarantee the best lobster quality.

The versatility of HPP allows processors to commercialize lobster in multiple presentations. Intact HPP lobster claws and tails are the highest valued product as it has an elegant display for sophisticated dishes (Fig. 3a), whereas legs, knuckles, and broken claws serve as minced meat for soups, wet salads or fillings. Alternatively, the shell remains in place after HPP, but loose enough to allow users an easy removal at the time of consumption (Fig. 3b).

For cooked lobster, processors may apply HPP to facilitate extraction of pre-cooked meat, and repack in tubs or pouches (Fig. 4). Alternatively, operators remove meat of cooked lobsters and repackage in pouches, tubs or trays, before applying HPP as a post-lethal intervention that extends shelf life and minimizes risk associated with Listeria monocytogenes recontamination.

Oyster, scallops, mussels, clams and other bivalve meat are highly regarded HPP seafood products. As in the case of lobster, HPP shucking detaches the adductor muscle to open the shell of bivalves. Furthermore, HPP keeps the flavor of unprocessed bivalves, while improving juiciness and flavor of the meat.

Meat removal following HPP shucking is so easy that processors wrap a rubber band around the shell in order to keep the meat from falling with handling (Fig. 5a).

On the other hand, Future-Cuisine Export LTD in New Zealand took advantage of the effortless bivalve meat removal to semi-automatize the process. Following HPP, the operators empty baskets full with pressure shucked mussels on a vibrating conveyor band. Vibration opens up the shell and drops meat, which is collected in a parallel conveyor band placed below as shown in Video 2.

Crabs exhibit harder shell and tougher meat, which makes it trickier for HPP shucking. Still, HPP shucking of crabs is feasible for certain species with wide notoriety among seafood processors. Freshpack received the ‘Best Foodservice Product award’ for the commercialization of HPP king crab legs (Seafood Expo, 2016). The company applies HPP for meat extraction, followed by vacuum packaging and freezing without losing a step in taste or overall quality (Fig. 6).

Another transcendent and very convenient HPP seafood application is the shelf life extension of cooked crabmeat, as done by Miami based company Seafarer’s Inc. In this case, blue crabs are cooked to hand pick crabmeat, followed by repackaging in plastic tubs. After HPP, Seafarer’s Inc. crabmeat lasts up to 21-28 days in refrigeration, while keeping the characteristics of more than 14,000 daily pounds of the freshly cooked product without using any chemical preservatives (Huffman, 2018). 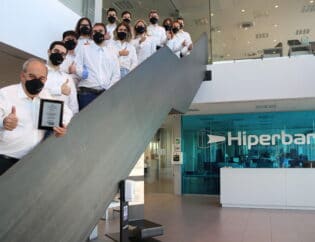 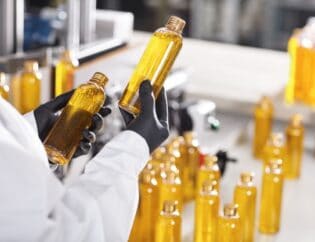 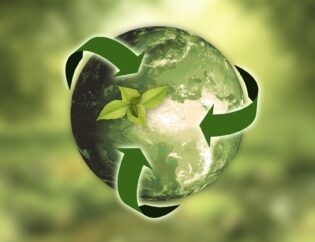 The Mariana Trench, located almost 11 km below the sea, is the deepest point in the Earth’s ocean. At the bottom, the pressure exerted by the water reaches 1,100 bar. This gives an idea of the magnitude of pressure that is generated inside the HPP unit, which is usually 6,000 bar: 6 times more pressure found in the Mariana Trench. This pressure is equivalent to 6 tons per cm2 or 6,000 times the atmospheric pressure.

Graduates in food science and technology, biology, agricultural or veterinary engineering. You enjoy working with people from other cultures, you have a strong customer orientation and a good level of English or other languages.

Qualified people in areas such as industrial maintenance, electricity, electronics and/or machining, enthusiastic about getting to know the machines first hand.

Mechanical and/or electronic engineers focused on customer assistance and incident resolution. This is your department if you like dealing with customers, solving problems and have great communication skills.

Engineers focused on research, the development of our machinery and the creation of diversification projects. If you are able to work in a team, are proactive and like innovation, then this is your place.

Free training courses for clients on the handling and maintenance of their machines.

Start up and commissioning

In all our commercial agreeements we include a comprehensive installation and commissioning carried out by our assembly specialists.